The Different Types of Rescues 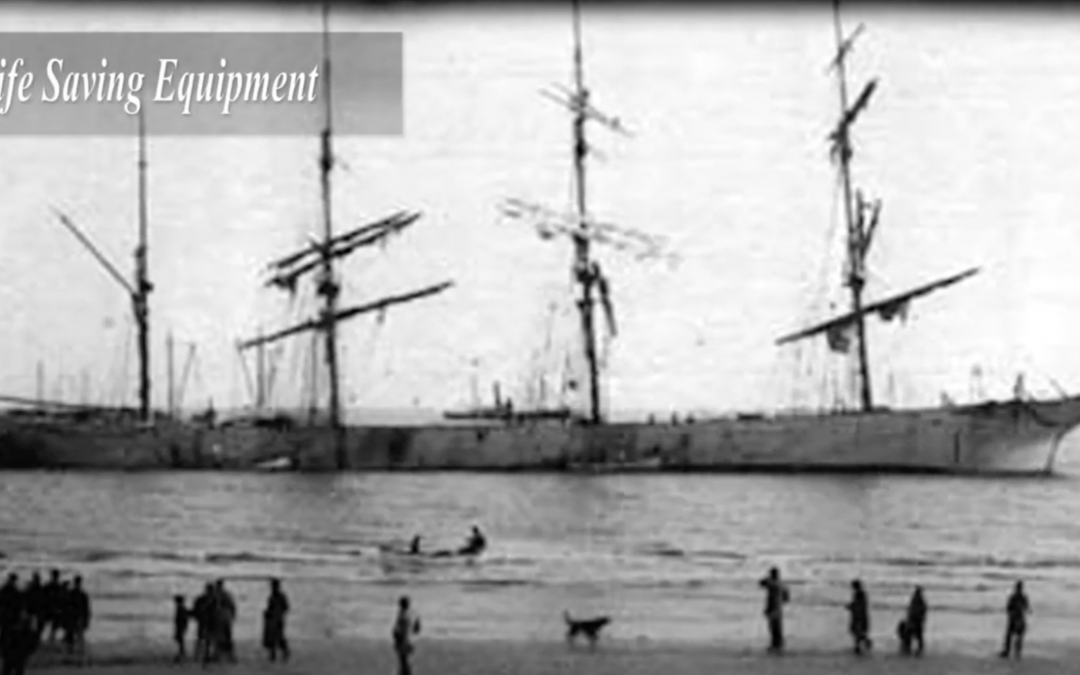 The natural power of the ocean presented a danger to any vessel that came too close to shore.

The man in the watchtower would see the flare and respond appropriately to that flare and rally the crew and go do what they had to do, in the form of a rescue.”

The various types of rescues that took place in Ocean City could be characterized by the equipment that the men had available to be brought to the rescue site.

“So, the Life Saving Service would go out; and a lot of their rescues were as simple as taking the ship’s anchor, rowing it offshore, as far as they could.  Then the ship’s own windlass would crank it off the sandbar and when it got about 15 degrees off the bar it could get enough windage that it could go on its merry way.  It would sail up to its anchor, hoist the anchor as they were sailing up to it, and be gone. But, in severe weather, with ten foot seas, waves breaking over the bar, that ain’t gonna happen, it’s just gonna get pounded to death.”

“There’s no gettin’ it, you know those ships would just be there, just constantly pounding on the bar, like a big sledgehammer, beatin’ them apart.”

“And if a shipwreck was close enough to the shore, sometimes the men would just wade out and get the people off the ships, because people were always afraid to get into the water because very few people knew how to swim, they didn’t know how deep the water was; there were all of the black issues of the ocean, dark and murky and who knows what.

The surfboat was most often the first equipment to be employed

“The Heaving stick is a somewhat like a piece of wood similar to bamboo and a big heavy lead weight on the end of it and a surfman would heave the line particularly if the crews did not do as instructed and stay with their boat waiting for help and they tried to get ashore. Normally their boats would capsize in the surf and surfman could throw this line out to them cause you can get quite a bit of distance with this line. This was carried both in the boat and in the beach cart.

In addition to surfboats, life saving stations up and down the coast were also equipped with advanced rescue equipment and methods and the men were trained as to when and how to use them. There was a line throwing canon know as a Lyle gun which could be used to begin the set-up of a series of line between the ship and the shore for use with a device known as a breeches buoy, or instead they could use a larger device known as a life car.

“The other way was to gather up all of the equipment that goes in the beach cart, and it would weigh about 1,000 pounds once it was loaded. The beach cart would be taken to the beach, 7 men would drag it to the beach. It has wide, wood spoke wheels, 5 ½” wheels and that has to be able to get through the sugar sand on the beach.“

“One of the means of rescue that the Life Saving Service had to them was the ability to fire a line out to a stranded ship and the line was fired by a small bronze cannon called a Lyle Gun named after the man who developed it – which was David A Lyle of the Army Ordinance. The gun was basically a scaled down version of a Civil War cannon on a wooden carriage.

“They set up the cannon, the line throwing gun on the beach. They loaded it, put the shot in it and hooked it up to a thing called a “faking box”.  A faking box was a way that you could coil line and throw out 1,200 foot of line, consecutively, once the cannon was fired.”

“The lines that they would fire out were three different sizes and the beach apparatus cart would have all three of these size boxes in the cart when they went to assist the rescue.”

“The Faking Box was a way to store the shot line by what was called “Faking it down” which is basically figure eights. A lot of people would say well how can you fire a line out with it all on those pins?”

“And you do that by taking the lid of the box, setting it up at a 45 degree angle, packing sand behind it.  The open part of the lid would be facing the ship. You’d dump the rope into the box, off the faking box, there’s a way to press it off, and if all of it was loaded correctly, you could get twelve hundred foot shot at one time.”

“And when the shot is fired, the line will not tangle and will not kink up and there was a prescribed method of faking it down. If you look here you can see that you go all the way round and round and round until you get to the end and you go around the last two on the end and then you run all the way back down to here around these last two and then you start going back to your fakes. One thing you have to be very careful of is you don’t miss a pin.”

The skill of the Men was tested on every drill, every preparation and every one of these rescues. Imagine being entrusted to fire a canon… toward a ship load of frightened and stranded passengers… in order to save them. But it had to be done quickly and precisely.

“They’d set the line up on the ship, they’d haul a heavier line out, they’d get the proverbial “clothes line loop” back and forth to the ship, so you could pull out and pull in, off of what were known as the “whip lines”, off of the beach cart.  From that you could pull back people, one at a time in a “breeches buoy”.  A breeches buoy was basically a life ring with a pair of pants sewn into it.”

The Breeches Buoy would have much like riding a modern “zip line” but in place of gravity, it was pulled in both directions with pure muscle power.

Wrecks on the beaches came about for many reasons… Weather conditions, navigational errors, some even due to the condition of the ships…

But many of the other Ocean going vessels that wrecked on the beaches were close to completing long Transatlantic Voyages and were filled with immigrants from all over the world, seeking a better life in the United States.

“So, these immigrant ships would come in and they’d sometimes come in as low as Atlantic City and start workin’ their way up the coast. If they got themselves in trouble along the shore, there might be 200 people on that ship, and there had to be a way to rescue them.  So they developed a thing called a “Life Car”. The first time a Life Car was used, it was used at the wreck of the AYESHIRE in North Jersey, it saved 201 lives when it was used.”

The Life-Car is a specialized galvanized steel vessel that is designed to keep its occupants dry and avoid hypothermia as they are transported from the foundering ship to the beach. The life Car on display in Ocean City New Jersey is the first Life Car to be built by Douglas Ottinger and is on permanent loan from the Franklin Institute in Philadelphia.

The Lifecar was seen as improvement over the Breeches Bouy because it offered protection from the elements and the ability carry multiple persons on each trip.

“But in the same way, they would take the Life Car, put it on the proverbial loop to the boat, and take it out to the ship. They’d put 4 people in it at a time, maybe 5, they’d bring ‘em ashore.  The wreck of the AYESHIRE; it took about 24 hours to do the whole service. In in that 24 hour period; in the 10th hour, or the 12th hour, the men of the Life Saving Service were exhausted. They turned around and all of the citizens in that area fell out to the beach; men, women and children, to help facilitate in the rescue of the people on the AYESHIRE.”

From large scale catastrophes to the preservation of cargo and everything in-between. The men were trained and ready for it all, and the manual contained the standards that they were expected to abide by…